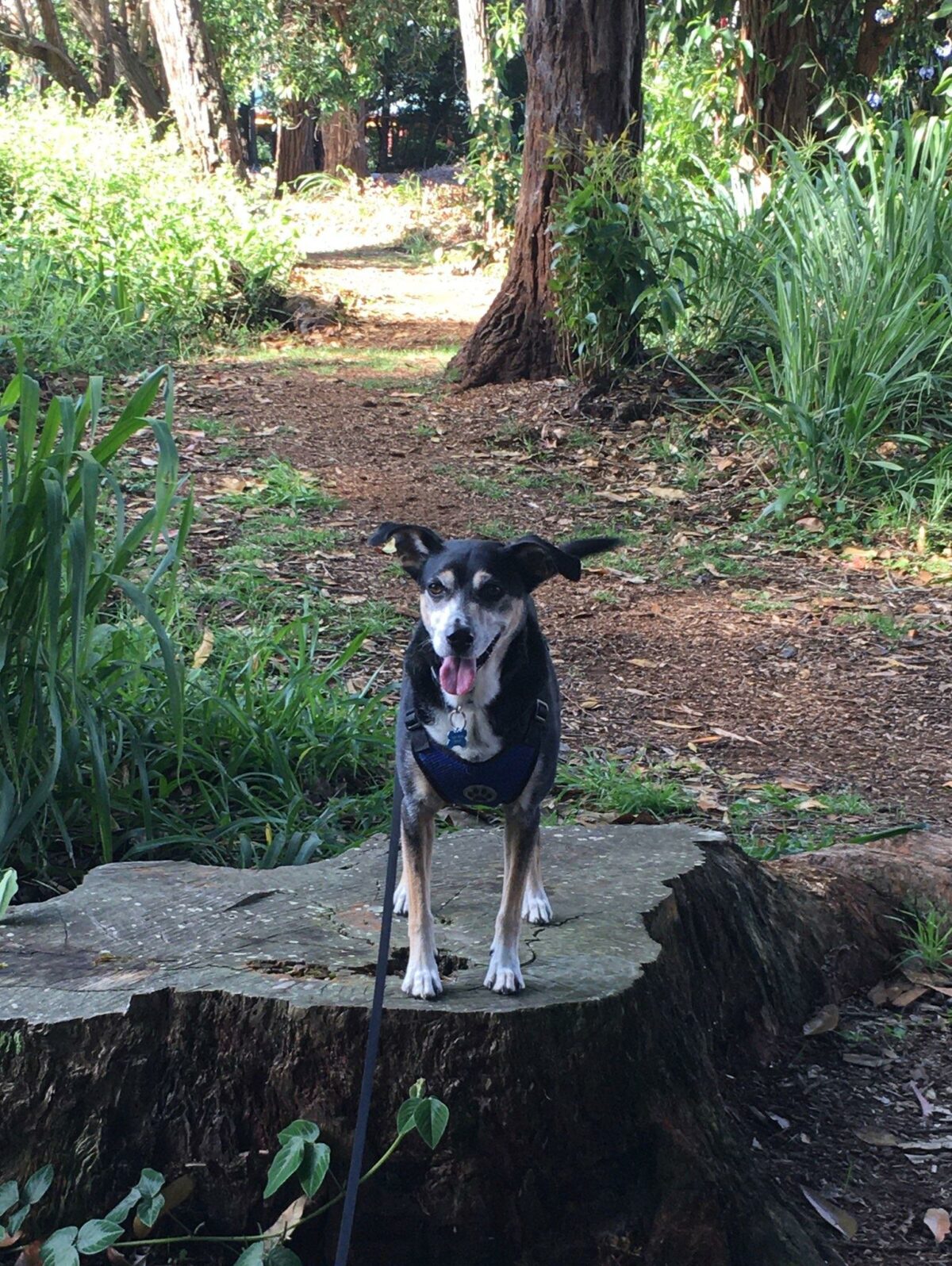 At present, Ke Ala Kahawai O Waimea is a two-mile, round-trip trail that is accessible year-round and can be picked up from the Waimea Nature Park, across from Merriman’s Restaurant or Kahawai Street.

Appropriate for all skill levels, the trail is primarily used for walking, running, biking and nature trips. Trail users can hear the tranquil stream as they are traveling along and observe the 36 species of Native Hawaiian ground cover, shrubs, and trees being restored to the area through a partnership with the Department of Parks and Recreation, Waimea Trails and Greenways Committee, and the Outdoor Circle of Waimea. Waimea’s Streamside Trail is also level, shaded, and keiki-friendly.

“The trail can be used in so many different ways, whatever your interest. The multifaceted wide-reaching nature of this trail is what makes it beautiful and valuable,” says Waimea resident Lisa DeSantis, Community Coordinator for Hawai’i Public Health Institute (HIPHI), a non-profit involved in Waimea Trails and Greenways’ Projects.

“And it’s always changing from day to day. One day someone might be using the stream to teach their keiki about rocks and water. The next day, I’ll see a dog splashing happily through the water. It has its own character and changes!”

“HIPHI is interested in the trail from the public health perspective. Greater physical activity means less health issues,” she says, explaining the connection between trail use and improved public health.

According to research, when more people get outdoors and on trails, the result is a significant decrease in diastolic blood pressure, salivary cortisol, and heart rate. It has also been linked to substantial reductions in diabetic incidents and cardiovascular mortality.

“And more people on trails means less traffic for those that still have to drive,” explains Lisa. “The trail can be used to get to work and school, mitigating HPA school traffic and even stress. If you’re not dropping your kid off, you don’t have that stress of getting through traffic.”

For Lisa, interest in Ke Ala Kahawai O Waimea has also become personal.

“I noticed litter on the trail and now I have a litter grabber to pick it up because I don’t want to see trash on my route anymore!” Lisa says of the understanding of m?lama ‘aina that trail use fosters. “When you’re on the trails, you develop a sense of ownership of the land.”

For Waimea residents and tourists, single occupancy vehicles are currently the primary mode of transportation. So from an environmental sustainability standpoint, more people on trails can mean less people in cars. And fewer cars means less emissions and more support for Hawaii’s goal of making the state carbon net-negative by no later than 2045.

Recognizing Progress and Aiming for Expansion

Great progress has been made on the ongoing Ke Ala Kahawai O Waimea project. People for Active Transportation (PATH) has helped secure a RAISE grant for the project. Additionally, trail signs have been installed and collaboration with Parker Ranch on this community project continues, with an emphasis on opening up the next mile, going to the Waimea Transfer Station across from the Sandalwood subdivision. “From there, you can see the planting terraces and auwai (ancient canals),” Clemson states.

“The trail is between my house and my office. And for my four-mile bike ride to work, I get on the trail and hear birds, see people I know, and see the work my neighbors have done on the trail,” Clemson says. “Right now, my commute is NOT safe though, so I understand why people would rather drive. But imagine if everyone could walk or bike to work instead of drive? We could get our work-out done on our way to work!”

This is enough to motivate his own efforts on maintaining the one mile of trail that’s currently open and working tirelessly to expand the trail in the future.

The trail’s growth depends on federal funding, and as such, goals for Ke Ala Kahawai O Waimea include making it an Active Travel Corridor (ATC) to qualify for federal funding. ATCs are “people only” paths connecting those walking, running, and biking to parks, schools and other neighborhoods.

“In Hawai’i Section 106, permitting with regards to historical properties tends to be the critical path when delivering federal-aid projects. In anticipation of federal funding, we have already begun the process and are nearing completion of our Section 106 consultation with a determination of ‘no effect to historic properties’,” Clemson attests.

Other goals include paving the trail to make it wheel-chair accessible and advancing efforts to expand the paved trail to 4.8 miles (following the Waikoloa Stream from Church Row down to a County Park across from South Kohala View Estates). To achieve these goals, the community and Hawai’i County must join forces. And we can start by simply using the trail!

Working Together to Open up Waimea’s Streamside Trail

On your weekday lunch or after swinging by the weekend Farmers’ Market, park at Ulu La’au and go for a stroll, following the stream. About a mile into your walk, you’ll notice a counter. Installed in June of this year by Barett Otani (assistant  to Mayor Roth), the counter is intended to determine how many people use the trail daily. And increased use of Ke Ala Kahawai O Waimea means more data to submit as proof that the trail is a valuable asset to the community.

Trail improvements and expansion also depend on the volunteers that maintain it, such as workers from HPA, Parker School, Waimea School, Kaiser Permanente, and Sales Force who have been involved in everything from spreading chips to clearing the stream on workdays.

But you don’t have to wait until a workday to make a difference. Just ask Forest Horwatt, a Waimea resident who was walking his dog on the trail one day when he saw volunteers working.

“About five years ago, I got on the trail after another dog walker told me about it. Being on the trail keeps my dog happy,” says Forest, explaining how he uses his weed eater to do trail maintenance about once a month. “I’ve been volunteering for the past year and a half when I have time. And periodically I meet up with other volunteers for workdays.”

Admittedly, Forest’s dog isn’t the only one who enjoys the trail.

“I always tell people about the trail – I love it! It’s awesome that we can have a little hike in the middle of town.”

“And there are definitely more people walking now,” Forest continues. “I’d like to see more people use it, but people don’t realize it’s there!

“The Waikoloa Stream runs through the center of town, but people don’t even know about it unless they get on the trail,” agrees Clemson. “Once it’s finished, however, it will be open to the widest range of people possible and everyone will be able to reap the benefits.”

Opening up the trail for increased stream visibility is another vision that Clemson and Forest share. “We need funds and volunteers to remove the weeds though,” Forest asserts. “It would be cool if carpenters could help with signage too.”

It will take a collaborative effort, but in the end Waimea Trails and Greenways will provide a paved, shared-use pathway that is separated from vehicular travel, making it more attractive and feasible for pedestrians and bicyclists of all abilities and ages to enjoy the outdoors while shifting away from motor vehicles.

“I want it to shine so people see that it’s great!” Forest exclaims. “I wish more people knew how cool it is and how much better it could be if even one other person volunteered. A little bit of time once a month really does make a difference.”

“The Waikoloa Stream was an important part of life in Waimea. ‘Wai’ means water and ‘koloa’ refers to a sound. ‘Ko’ refers to sweet and ‘loa’ refers to gentle. Put the two words together and you get ‘pleasant’ or ‘a pleasant sounding stream’,” Leningrad says, before explaining how the sound comes from the muffled tumbling of rocks in a stream that is not rushing downhill, which was likely a pleasant change for those men who came to Waimea to recuperate from battle elsewhere.

“The Hawaiians made canals that drew water from the stream to grow taro. And the Ki Puu Puu warriors likely crossed the stream’s trail on their way to practice Pelu,” Leningrad reminds us. “Later, the trail became a place for the Marines to recover.”

From the ancient Ki Puu Puu to the Camp Tarawoa Marines, Ke Ala Kahawai O Waimea is a place of historical significance. By promoting its expansion, we honor the warriors of years gone by while giving our community a place to recover, invest in our health, and connect safely to each other and the aina.

PATH is committed to elevating the efforts of community groups and Hawai’i County to create more multi-modal trails for active transportation in Hawai’i, with an emphasis on developing more protected places for people to use mobility devices, walk, or bike on Hawai’i Island.

By supporting continued development of the Ke Ala Kahawai O Waimea project and other shared-use paths and walkways through the Building Better Ways for Hawaii (#BW4H) series, we hope to encourage Hawai’i County to take action, expanding existing passageways and creating safer spaces for walkers, runners, bicyclists, and trail users. We’ve also highlighted the progress of Hilo Bayfront Trails, the Queens’ Lei, and Ala Ohia Road’s Bench Project,  so be sure to check out these blogs as well!