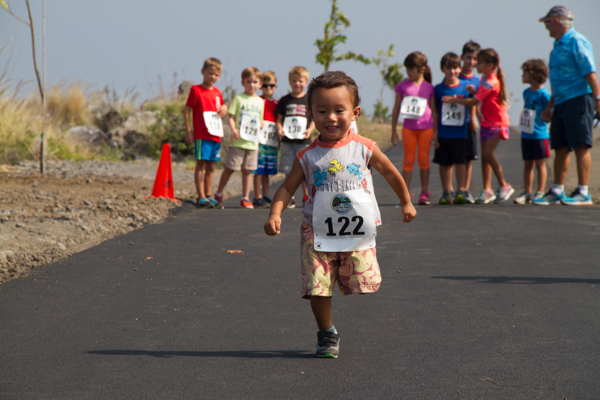 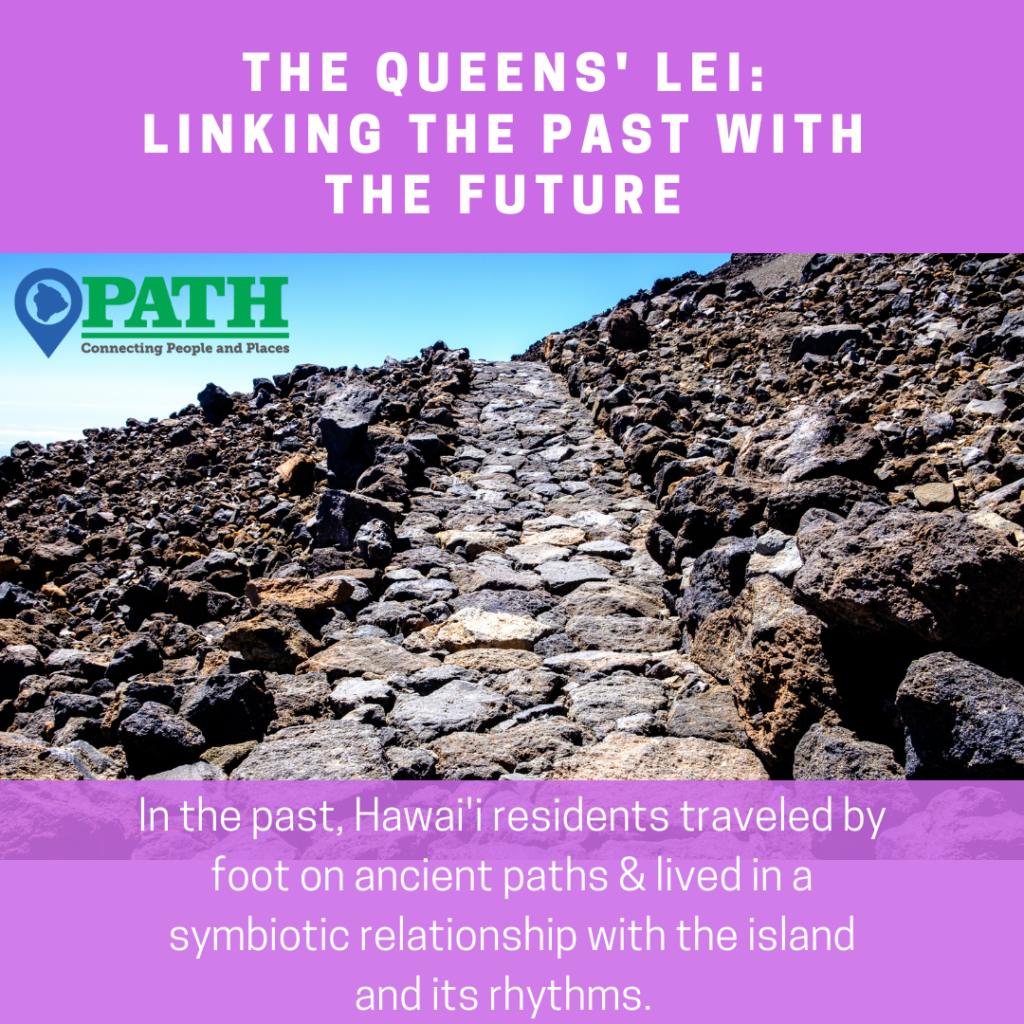 In the past, the love and respect that Hawai’i residents had for the aina were unmatched. They traveled by foot on ancient paths and lived in a symbiotic relationship with the island and its rhythms. This was a relationship modeled by generation after generation of Hawaiian royalty, including Analea (Ane) Keohokalole and her descendants.

Today, Kona, HI visitors and residents are largely disconnected from this relationship. Our lack of pathways means that we just can’t travel by foot or by bike as much as Hawai’i inhabitants did in the past. Instead of bicycling, walking, and running on accessible paths, we must resign to running and biking on the road with motorized vehicles – An option that is not only aesthetically unappealing and noisy, but often dangerous as we breathe in fumes from passing automobiles and risk being hit by distracted drivers.

Those of us who venture away from the main roads are grateful for the few off-road options in Kona, but they are short and increasingly overpopulated. It would seem that connecting with the natural beauty of West Hawai’i is too much to ask.

But what if there was a way to mend the disconnect?

Mending the Disconnect Between Us and Our Aina

For decades, the idea of building a trail that circumnavigates all of Hawai’i Island has been a dream of many Hawai’i residents who want to mend the growing disconnect between us and our aina.

“It’s a wonderful concept, and since the Queens’ Lei was low-hanging fruit, we started with this project,” says Tina Cothier, former PATH Executive Director, explaining that the idea for creating a 16.75-mile circulation loop that indeed resembles a lei was born in 1997.

Named in honor of na wahine ali’i, Queen Ka’ahumanu, Queen Lili’uokalani, Queen Emma, and the Queen Mother Ane Keohokalole, the Queens’ Lei was designed to be a shared-use pathway primarily for pedestrians and bicyclists alike.

In July of 2014, project development stakeholders met with the late Hawai’i County Mayor Billy Kenoi, whose enthusiasm and support eventually made the first mile of the Queens’ Lei dream a reality.

“We also worked closely with Hawai’i County Director of Public Works, Warren Lee, and the Hawai’i County Highways Division to put the pathway down,” says Tina, who was Executive Director at the time.

“Why plant trees? Because it’s one of the best ways to create a more sustainable future,” says Cindy Armer, President of PATH’s Board of Directors. “Planting trees also removes CO2 from the atmosphere, attracts native birds, and provides shade for path users!” To this day, each tree on the pathway is cared for and watered each week by a local volunteer.

The benches were provided by Bella Pietra Kona and wayfinding signs with mileage markers were made possible by a grant from Hawai’i Public Health Institute (HIPHI).

After years of hard work, PATH, Hawaii County, LavaKids, West Hawaii Rotary Clubs, and members of the community were able to gather at the West Hawaii Civic Center on April 25, 2016 for the dedication of the Queens’ Lei, which included Kahu Danny Akaka Jr’s offering of a traditional blessing of the one-mile long, shared-use pathway and a keiki dash to christen the trail.

By November 2016, the stretch of trail from Kealakehe Parkway to Palani Road was completed! 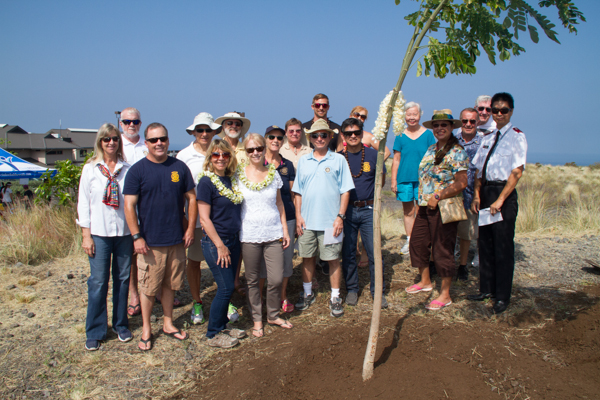 More Than a Sidewalk

Today, the Queens’ Lei is much more than a three-mile sidewalk paved along a cement road. The pathway is adjacent to the roadway while remaining a safe 25-feet distance away from the road, making it a safe and accessible place for athletes, families, keiki, kupuna, and the disabled to exercise without worrying about vehicles. And you can’t beat that refreshing ocean breeze on the makai side of the Queens’ Lei!

Already popular with LavaKids, Kealakehe High School, the West Hawai’i Office of Aging Seniors, and many other community organizations that use it for their programs, the pathway became even more of a community asset during the lockdowns of 2020. While gyms, pools, and parks closed due to the pandemic, the Queens’ Lei remained one of the few places in West Hawai’i where we could get a socially-distanced workout in or get our keiki out of the house for a bike ride.

The Echo City Knockouts, Kona’s female roller derby team, used the pathway for practice when COVID closed their flat-track down! And with its stunning views of the sunset, the Queens’ Lei is quickly becoming a world-class scenic recreational pathway that attracts Hawai’i visitors who want to get away from the hustle and bustle of Ali’i Drive.

Running past the West Hawaii Community Health Center at Kealakehe, the pathway even serves as a mutual reinforcement strategy for the Center’s Diabetes Prevention Program participants. If we keep the momentum going, the three-miles of Queens’ Lei will one day expand to a 16.7-mile loop where health care providers can refer patients for exercise.

It won’t be long before walking groups can meet on the portion closest to their homes or workplaces instead of driving all the way to the Civic Center to log a mile or two in the morning. From the airport to Kailua Village, employers will be able to incorporate any stretch of the circulation loop into their wellness initiatives.

And with nearly 17 miles of recreational opportunities for West Hawai’i residents and visitors, we will be able to walk the dog, ride our bike to classes, look for the green flash at sunset, or push our keiki in a stroller under the shade of well-loved trees.

Linking the Past with the Future

Vital to community circulation, the Queens’ Lei will not only connect all of North Kona, but will also bridge the gap between our past values and the future.

But the first mile of the Queens’ Lei alone required $50,000 for completion, much of which came from Ironman World Championship Events and Kaiser Permanente. As the project continues to develop, financing the Queens’ Lei is a challenge and fundraising is imperative!

The logistics of completing the entire project are dependent on several factors, including permissions from the State and National Parks and  Hawai’i County’s involvement. While the County has expressed support of the Queen’s Lei, we have not been able to move the project forward with the State and the National Parks System.

At PATH, this is especially concerning because there are currently several transportation grants available that exist to fund non-motorized transportation projects like the Queens’ Lei! If we don’t take advantage of these grants soon, there are road projects underway that will eliminate the concept of expanding this shared-use pathway… and erase many of the benefits that the 16-mile loop could offer our community.

Also concerning is the lack of respect for the Queens’ Lei trees. Each and every one of the individuals who have adopted a tree to water and care for make the pathway such a special place to walk, ride, run, and connect, but recently, PATH has had reports that the trees’ signs were taken down or hung in trees. We don’t know who is responsible for moving the signs, and it is upsetting that this has happened. The good news is that our tree care volunteers know their trees and can still care for them despite the lack of signage.

If just for a day our king and queen

Would visit all these islands and saw everything

How would they feel about the changes of our land? 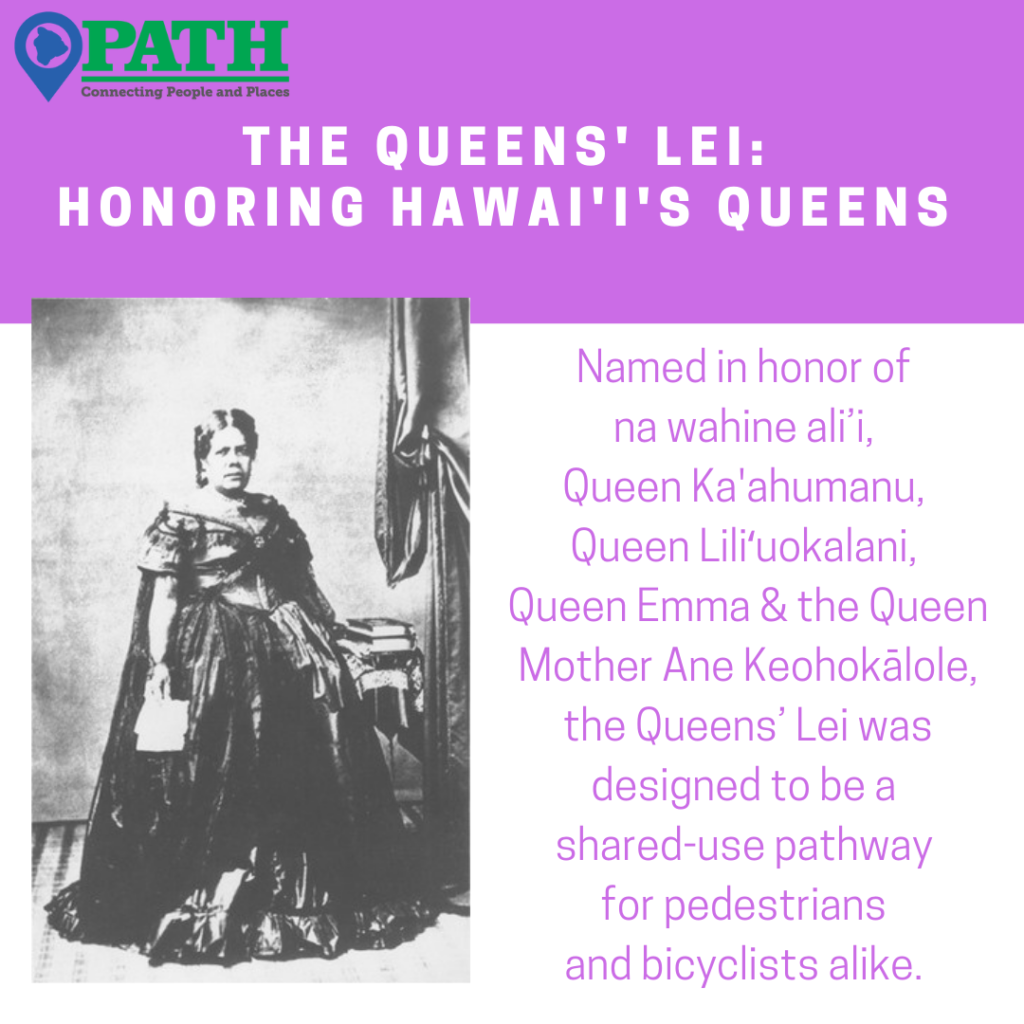 “This 16.7 mile circulation loop might help address some of the loss of the mauka-makai connectors that once existed,” Tina points out. When completed, this regional trail will connect all of North Kona, enabling us to enjoy safe passage and strengthen our connection to the aina once again.

Additionally, the Queens’ Lei would honor the queens for which the pathway is named, including Queen Ka’ahumanu, a visionary who led Hawai’i to a better way of life, Queen Mother Ane Keohokalole, and her granddaughter Queen Lili’uokalani, who is credited for preserving our treasured beach access so everyone can enjoy Hawai’i’s oceanfront.

These Queen’s left an enduring legacy, and now it’s our turn to make a difference for future generations. Here are a few ways that we can take action today:

With the help of the community and Hawai’i County, the Queens’ Lei project can be completed and this community-wide path can connect the Kona community with essential economic, educational, and recreational opportunities that live into the future.

PATH is working to elevate the efforts of walking/biking/running advocates and Hawai’i County, with an emphasis on creating more protected places for people to use mobility devices, walk, or bike on Hawai’i Island. By supporting continued development of the Queens’ Lei project and other shared-use paths and walkways through the Building Better Ways for Hawaii (#BW4H) series, we hope to encourage Hawai’i County to take action, expanding existing passageways and creating safer spaces for walkers, runners, bicyclists, and trail users. We’re shining the spotlight on the progress of Hilo Bayfront Trails, Waimea Trails and Greenways, and the Queens’ Lei all summer long, so be sure to check back soon!