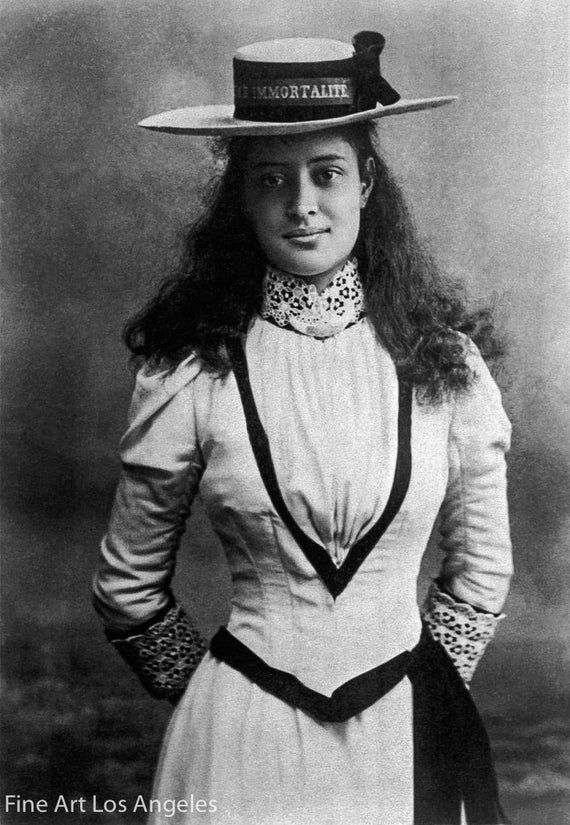 If you guessed a French pastry, you’re way off! If you suspect something related to bikes, then you’re on the right track!

In the 19th century, a woman who rode a bicycle (or velocipede) was bestowed with this fancy title. And since March is Women’s History Month, it’s the perfect time to remember some brave and inspiring women who paved the way for velocipedestriennes and active wahine everywhere!

The Picture of Free Womanhood

Susan B. Anthony was more than just one of the pivotal leaders in the women’s suffrage movement of 1869 – She was also a bike enthusiast!

In an interview with reporter Nellie Bly, Anthony revealed her stance on cycling. “I think it has done more to emancipate women than anything else in the world,” she said. “It gives women a feeling of freedom and self-reliance. I stand and rejoice every time I see a woman ride by on a wheel… the picture of free, untrammeled womanhood.”

Around the same time, 5000 miles away on Hawai’i Island, young Victoria Kawekiu Lunalilo Kalanikuiahilapalapa Ka’iulani Cleghorn was named heir to the throne of Hawai’i by Queen Liliuokalani. The year was 1890 and 15-year-old Princess Ka’iulani was adjusting well to her destiny as ruler of the Hawaiian Islands… in between mastering the skills of horseback riding and surfing.

The would-be queen was eventually sent to England to receive her education in language and the arts as part of preparations for her royal duties. While in school, she learned of the Hawaiian monarchy’s overthrow. A distraught Princess Ka’iulani immediately traveled to Washington D.C., imploring President Grover Cleveland to defend Lili’uokalani’s honor and restore the Hawaiian’s independence.

Although the Hawaiian monarchy remained unrestored, Ka’iulani worked alongside Lili’uokalani to secure the voting rights of the Hawaiian people. Before her death in 1898 at only 23 years old, the Princess hosted a luau for a delegation of commissioners sent to the islands by President McKinley and, along with leaders of the community, advocated for the right of Hawai’ian people to vote.

The Princess was part of a new generation of young women around the globe who were defying the norms, following their hearts, and taking a stand against injustice.

Head Over Wheels for Cycling

In 1889, a teenager named Tillie Anderson immigrated from Sweden to Chicago, IL, where she soon fell head over wheels for cycling. A seamstress by trade, Anderson saved up her money until she had enough for a bike.

It wasn’t long after that that Anderson began racing, performing so well that her beau (and eventual husband) Philip Sjöberg decided to shift his focus from his own racing to coaching Anderson. Trained by Sjöberg, she went on to win first place in 123 of 130 races, most of which were six-day events. Each day, the women cyclists would ride two hours on a banked velodrome track, covering eight laps to a mile as fast as they could.

As both a strong cyclist and a strategic racer, Anderson was a stand-out among her male competitors on the track-tested endurance events. Unfortunately, her racing days were numbered. By 1902 Anderson and her fellow female athletes were barred from bike racing after an accident involving two women cyclists. It would be another 70 years before women could officially participate in bike races once more.

This didn’t stop five African-American women from setting out on an epic journey by bike in 1928. Trail blazers Constance White, Ethyl Miller,  Leolya Nelson, Marylou Jackson, and Velma Jackson biked an astounding 250 miles over the course of three days, all the way from New York City to Washington, DC at a time when cycling was a male-dominant, white-dominant activity.

When asked what motivated them to embark on their ride, they responded that they were motivated by “the love of the great-out-of-doors!” There is little documentation available about their adventure, but their motivation for riding is a timeless one that many of us can relate to.

The 1970s was imperative for women athletes everywhere. Across the globe, females began to race bikes again. And in Hawai’i, Chicago native Dr. Donnis Thompson was setting the stage for a flourishing wahine sports program at the University of Hawaii.

In 1961, she started and coached the university’s first track and field program for women. Once she had enough funds, Thompson introduced the women’s volleyball to U of H. And by 1972, she was heading the university’s entire athletics program, expanding the catalog of sports offered to female student athletes from two to eight, and growing the number of women’s athletic scholarships from a scant few to 30.

Thompson would later become the first woman to serve as the state of Hawaii’s Superintendent of Education. And the former University of Hawaii women’s director of athletics was known not only for being a champion for female athletes in Hawaii, but for adopting and perpetuating the Aloha spirit. In fact, Thompson was famous for having women’s volleyball coach Dave Shoji bring boxes of pineapples along when they travelled as gifts to officials and opposing teams.

Born in 1929, Ellen Fletcher escaped from Berlin on the Kindertransport trains. Her teen years were spent as a Jewish refugee in the London of World War II, where she biked to her job at a factory.

Eventually, Fletcher moved to Palo Alto, California, where her start in cycling advocacy began. As a mother concerned for her children’s safety, she was an ideal fit for the role of safety chair of the local PTA. There she realized that there was no better way to protect school kids from the danger of automobiles than to reduce auto traffic around schools’ yards.

By 1974, she was the PABAC’s chairperson and a driving force behind an innovative bikeway concept: A street where automobile access would be limited (but not restricted), in an effort to provide cyclists with a safer alternative to routes with heavy automobile traffic. This concept grew into the first “bicycle boulevard” in the U.S.

Fletcher’s tireless efforts to make transportation safer and more sustainable continued throughout her life. At 83 years old, despite suffering from lung cancer, she rode her bike to City Hall for a hearing on bicycle improvements. And in 2012, when the transportation activist passed away, almost half of Fletcher’s memorial attendees biked to the service.

The Bicycle’s Role in Women’s Rights

Women’s History Month reminds us to recognize the important individuals who advanced women’s rights and women’s health. And we hope that the stories of these wahine athletes, advocates, and adventurers inspire more freedom, self-reliance, self-respect, courage, love for the outdoors, and drive to create a better, safer community for all of us to move and live in!