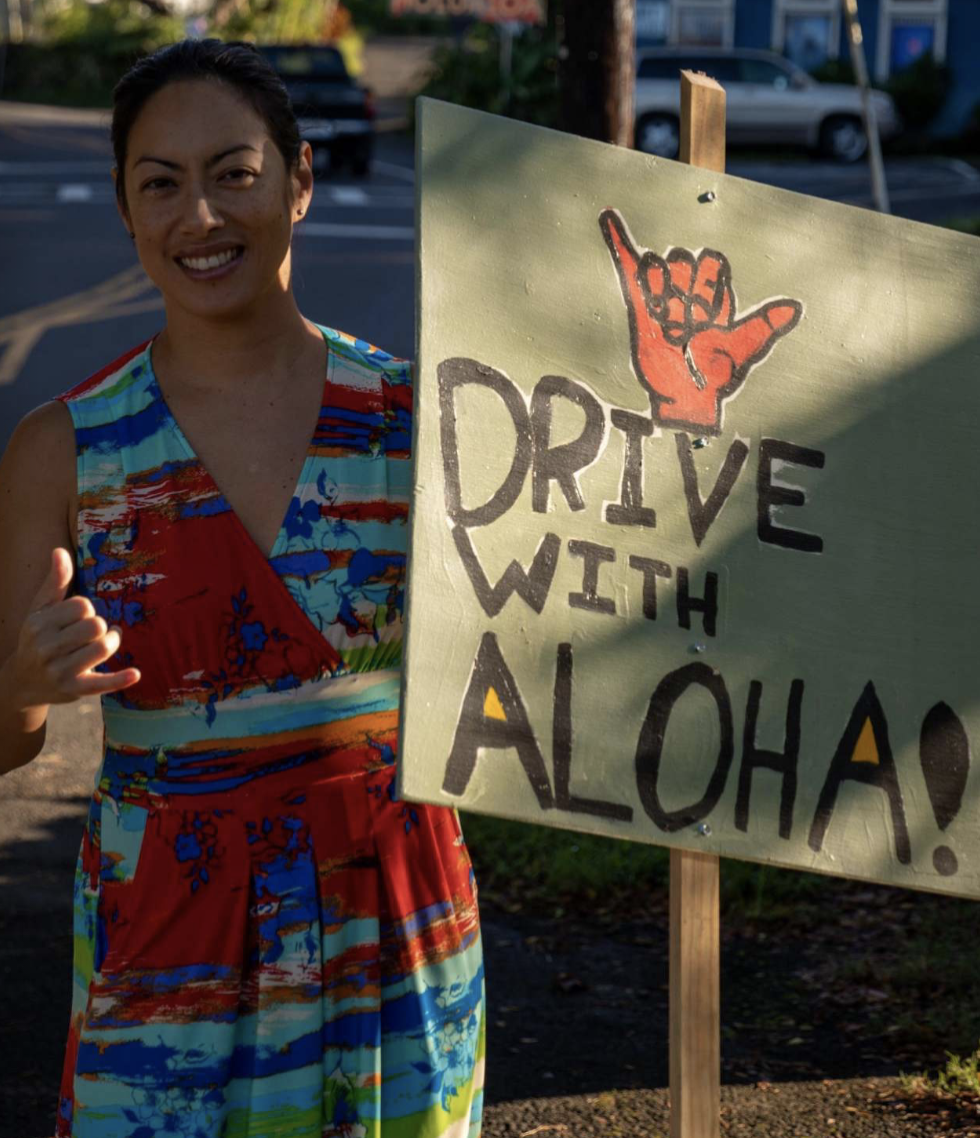 A motorcyclist is in critical condition after a collision with a car. A driver accidentally hits and kills a pedestrian. It seems that not a day goes by without the news reporting on a traffic crash on Hawai’i Island.

“That’s just Big Island traffic,” is a common sentiment. But what if we didn’t have to accept this endangerment of vehicle drivers, motorcyclists, and pedestrians as a way of life?

Changing Our Approach to Traffic Safety

According to traditional traffic safety approaches, traffic deaths are inevitable and saving lives is expensive!

Unlike traditional traffic safety approaches, Vision Zero proposes that what have long been called “accidents” are more likely related to our decisions and systems. The choices we make have far greater impacts than we have accepted in the past, especially at the policy level and related to the built environment.

Vision Zero acknowledges that traffic fatalities on roadways are preventable and defines traffic collisions as a systemic problem. To solve this problem, it’s vital to have collective action, political will, and a multi-disciplinary, comprehensive approach.

Vision Zero emphasizes the need for data-driven strategies that prioritize effective solutions for eliminating fatalities on roadways. First implemented in Sweden when the Swedish parliament adopted it as the official road policy in 1997, Vision Zero has since spread across the globe and is gaining momentum in cities across the U.S.

Rather than completely blaming drivers and other users of the transportation system, Vision Zero places the primary responsibility for accidents on the overall system design, addressing infrastructure design, vehicle technology, and enforcement. As a result, Sweden now has one of the lowest annual rates of road deaths in the world (three out of 100,000 as compared to 12.3 in the U.S.). What’s more, their fatalities involving pedestrians have dropped nearly 50% in the last five years!

Hawai’i County Planning Director Michael Yee first learned about Vision Zero when visiting the state of Washington. Impressed by the program’s success specifically in Seattle, Yee returned to Hawai’i and brought the program to the attention of Tina Clothier, who was PATH’s executive director at the time.

“Hawai’i County had and still has the highest per capita death rate in the state from traffic fatalities, which is unreasonable and incomprehensible,” says Tina. “Loss of life is not an acceptable price to pay for mobility.”

In 2019, PATH and Yee presented Vision Zero’s systems approach to Mayor Kim, emphasizing that people have safer options to move about their communities, whether bicycling, driving, or riding transit. After being asked to adopt Vision Zero as an initiative, Mayor Kim authorized the development of a Vision Zero task force, which was made up of individuals from different departments and various state and county agencies, as well as private citizens, organizations like Blue Zone, and PATH.

Hawaii’s Vision Zero Mission Statement is to eliminate all traffic fatalities and severe injuries on our roadways, while increasing safe, healthy, equitable mobility for all by 2030. Through the Vision Zero Action Plan, the County of Hawai’i and our partners are working to prevent severe crashes as well as fatalities, which requires a shift in philosophy.

It’s an approach that prioritizes the preservation of human life over the convenience of travelling quickly on the streets and roads across our island. One that says traffic deaths are preventable if we take into account that humans make mistakes and then accommodate those failings on our roadways through good design.

Vision Zero’s principals include a focus on system level changes on Hawai’i Island. That’s why PATH is working with many different departments to create plans that will change the current dynamic – Here’s looking at our partners in change, which include the Dept. of Public Works, Hawai’i County Police, and island healthcare organizations!

The most integral Vision Zero principal is undoubtedly this: Each community is unique!

As such, communities should have a voice in defining issues, determining what safety on the roadways looks like for them, and developing solutions for their own community.

Vision Zero is an initiative driven by data from the Hawai’i County Police Department, Hawai’i Department of Transportation, NHTSA Fatality Analysis Reporting System, NHTSA National Center for Statistics and Analysis, and the U. S. Census Bureau.

On Hawai’i Island, one of Vision Zero’s goals is to share fatal traffic crash data that everyone’s system can understand, and do so in a seamless and timely manner. Thus far, crash data from the years 2013 to 2019 was analyzed for the purpose of identifying data correlations, so those working to prevent traffic deaths could make informed decisions and take action.

What did the data reveal? Who the most vulnerable road users are, among other things. It’s no surprise that people traveling by foot, bicycle, motorcycle, or moped are at much greater risk of being killed than those in automobiles! 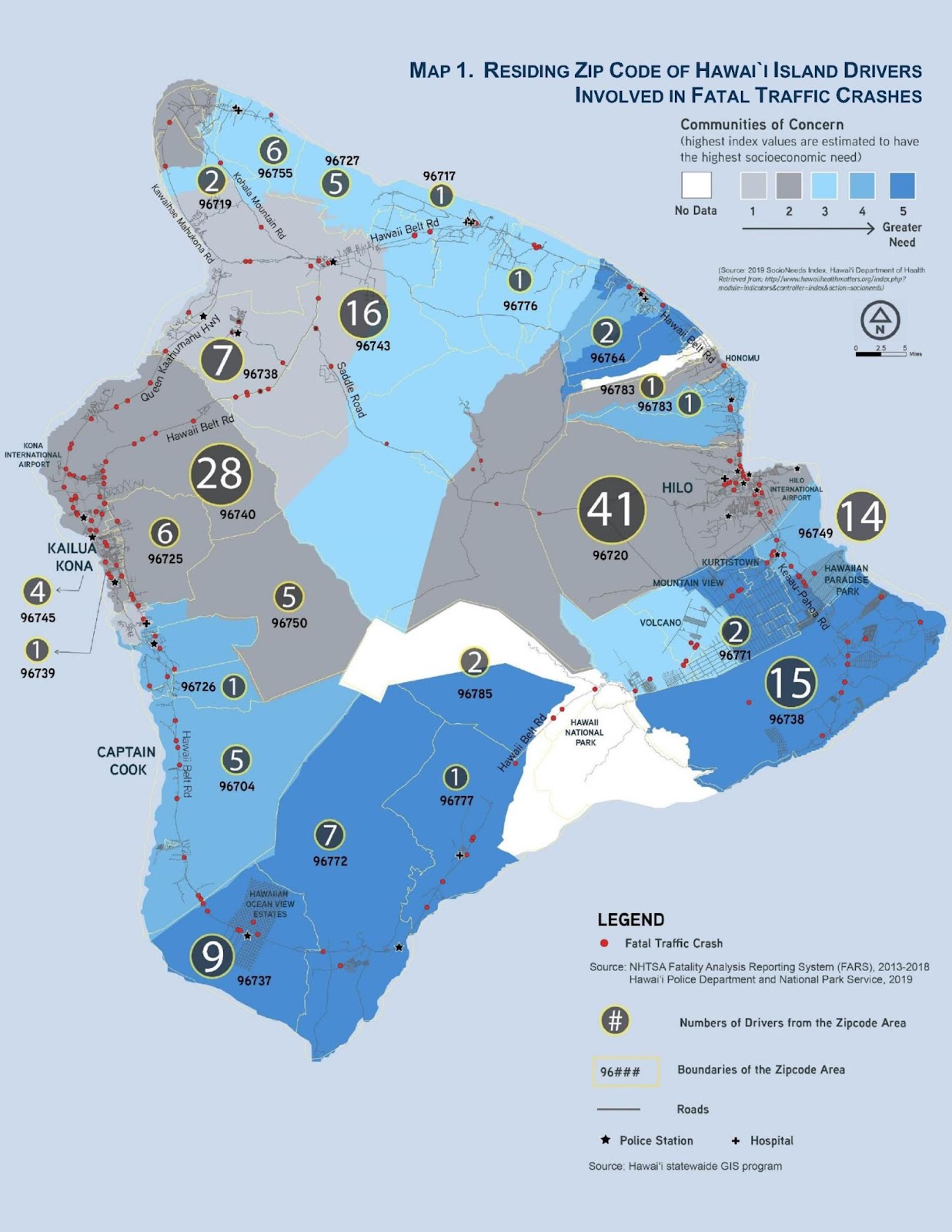 The data maps also made it clear that the high fatality networks are all along the highway from Kona to Hilo to Volcano. Of these fatalities, 67% occurred on state-owned roads, while 28% occurred on county-owned roads, which generally experience more congestion in high population areas.

Most people assume correctly that speed is a factor. In fact, 41% of traffic crashes involve excessive speed. And the majority of these crashes actually occur in areas where a speed limit of 35 mph or less is posted.

Here are some other statistics that are even more staggering:

After a year of analyzing the data, the Vision Zero Task Force used it as the basis for a set of action plans within the Five E’s: Engineering, education, enforcement, encouragement, and evaluation. 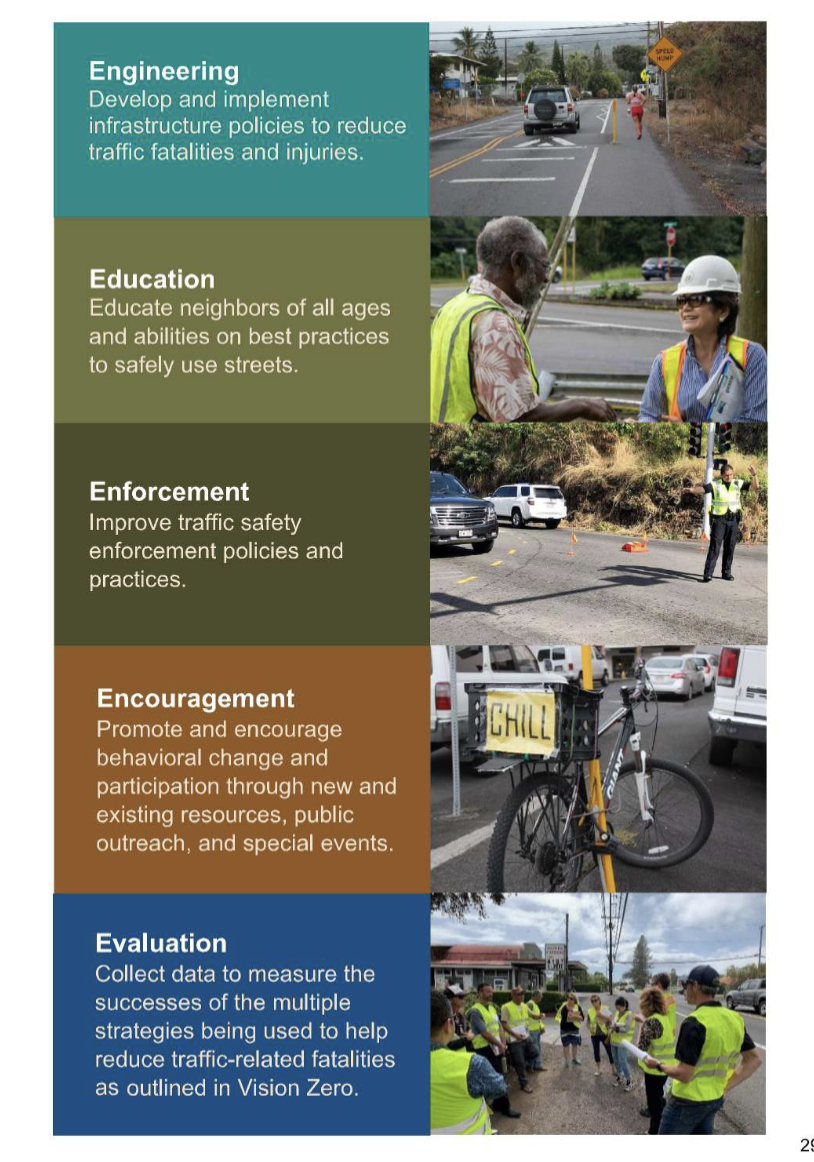 Implementing these plans is the first step in reducing and ultimately eliminating traffic fatalities!

“As a system, we need to bring these numbers down. In 2021, PATH has been instrumental in keeping this work front of mind, despite challenges,” says Jessica Thompson, Executive Director of PATH.

“The pandemic shifted our focus slightly off of traffic crash prevention. We also had a mayoral administration change, which creates a lag time as they get their cabinets settled. But Mayor Roth has been a long-time supporter of Vision Zero. He was a member of the task force when he was a Hawai’i County prosecutor and is a big believer in systemically making changes to mitigate fatalities.”

The Law of the Splintered Paddle

Hawaiian history tells us that young Kamehameha was once an aggressive chief. The story goes that the young chief even chased after two fishermen in a Puna fishing village. While pursuing them, his foot got stuck in a crevice, and one of the fishermen struck Kamehameha over the head with his paddle in defense, which splintered into pieces.

After the incident, Kamehameha recognized that it was wrong to misuse his power and learned compassion. Years later, Kamehameha declared a new law, “K?n?wai M?malahoe” or “the Law of the Splintered Paddle.” Meant to protect the innocent and vulnerable from unprovoked attacks, this law proclaimed that the defenseless (especially k?puna and keiki) across Hawai’i be able to sleep safely on the side of the road, unharmed.

The law provided for the safety of non-warriors during wartime and became the first written law of the Kingdom of Hawai‘i. After being added back in 1978, the law is part of Hawaii’s State Constitution today.

It is symbolic of servant leadership, reinforcing the importance of:

“We take that to mean that anyone who uses our roadways should be able to do so without fear of harm,” explains Tina.

A Growing (and Deadly) Concern

A year-to-date comparison reveals that this year, there were 616 major accidents as compared to 594 during the same period last year. And statistics show that in the first 10 months of this year, Hawai’i County’s traffic-related fatalities rose from 13 last year to 22, with most incidents involving motor vehicles. Of the 22 fatalities, 9 involved motorcycles and scooters, 11 involved motor vehicles, 1 involved pedestrians, and 1 involved an ATV operator.

In response to this surge in traffic crashes, PATH is partnering with the government on local and state levels to establish evidence-based systems that ensure the safety of our most vulnerable road users.

“People will make mistakes while they’re driving – We are human. But our road designs and our speeds do NOT have to dictate that when we make mistakes, those mistakes are fatal,” says Tina.

“We have created a system that has traffic fatalities and injuries built into it. We know that we can change that system because it’s been done in other places, eliminating traffic related deaths,” affirms Jessica, who sat on Portland’s Vision Zero task force before moving to Hawai’i to work for PATH. “We also know that bicyclists and pedestrians are our most vulnerable road users. If you drill down on that data, you know that the people who are most at risk are often people who have the least access to single-occupancy vehicles, and are walking or bicycling on our roadways.”

Traffic deaths are NOT accidents. Simply put, they are death by design.

But what can we collectively do to change the system?

PATH is committed to facilitating task force meetings and working through an action plan list. What’s more, Mayor Roth and Hawai’i County are hosting a Vision Zero website listing crash data, which will be updated as more data is attained. 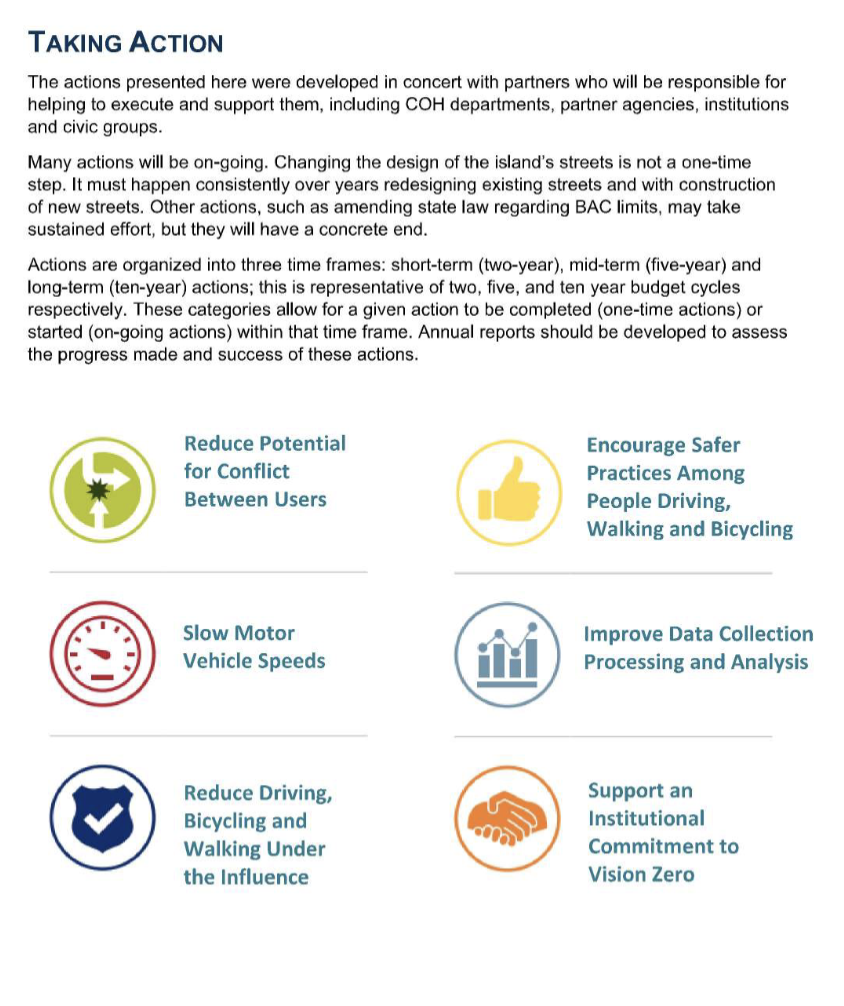 To change the system requires a more timely exchange of data, from the Dept. of Transportation and NHTSA, to the Police Dept. and Public Works. Doing so can result in more timely crash audits and provide insight as to how and why a crash happened… and what design elements we can change to mitigate this in the future!

“Never give up!” says Tina, offering a piece of advice for those working to create safer options here on Hawai’i Island. “This takes collaboration and understanding of the long-term nature of planning. It’s like pushing a boulder up a 20% grade incline. I believe that we have and will continue to push it over and onto level ground!”

Additionally, we can all commit to meeting with different members of our community and mobilizing them to help develop an educational program, so we can move the traffic fatalities trend in the right direction… to zero! 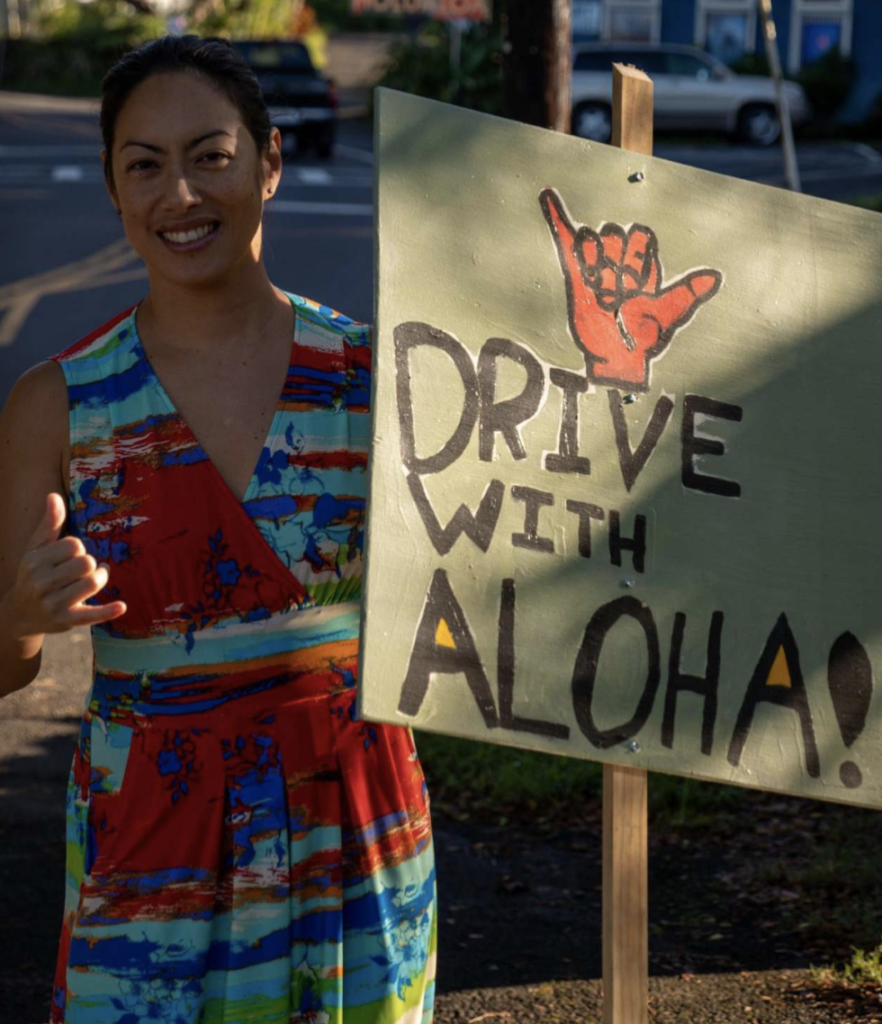 PATH is committed to elevating the efforts of community groups and Hawai’i County to create more multi-modal trails for active transportation in Hawai’i, with an emphasis on developing more protected places for people to use mobility devices, walk, or bike on Hawai’i Island.